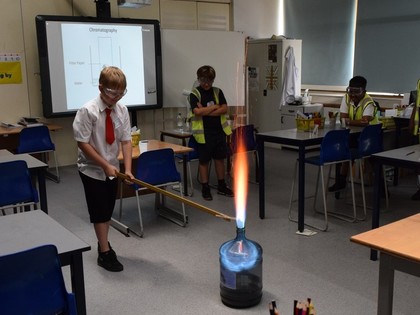 Our improving secondary school opened its doors to show prospective students what is now on offer.

Royal Docks Academy joined the BMAT group of schools in September and set about turning around its fortunes, boosting student numbers and raising attainment.

Despite a troubled past, the school is keen to show as many families as possible the dramatic changes going on inside since the conversion to an academy.

Teaming up with the Boleyn Trust, the school welcomed more than 300 Year 5 pupils from Cleves, Ravenscroft, Tollgate, Shaftesbury and Rosetta primary schools for a summer school.

Karen Kioi, head of Year 7 and transition, said: “We welcomed in the whole of Year 5 from the Boleyn Trust. We wanted to give them a flavour of what goes on at this school and to show them that Royal Docks is no longer the school it once was.

“The pupils went home excited each day and their primary teachers have been asking questions about the school and our open evening.

“It has been awesome. The greatest thing, for me, is the children saying they had enjoyed their time at Royal Docks so much. We hope they have gone home and told their parents how much they liked it here, so they will come and see for themselves and consider Royal Docks as an option in the future.”

Zainab Khonat, teacher at Shaftesbury Primary School, said her pupils know the secondary schools close to where they live and don’t often look any further afield. She said: “The summer school is going to make our pupils and their families more aware of Royal Docks. At this age, they tend to only know the schools their older siblings go to. But, now when they go back to school, this will be something they are talking about.

“The building is amazing and the staff are really lovely and approachable. It has been really exciting for the children and they have enjoyed it a lot.”

For Shaftesbury pupil Faris Abdul Kadir, it was the fun science lessons which captured his attention. He said: “It was so fun. It was the best science lesson I have ever had. We do science at primary school, but not like that.

“I would like to come here as it’s very cool.”

Families are invited to look around the school during its open evening on September 13.